In what’s rapidly become one of the most popular features on the Sheriff of Sodium site, I had planned to clear out my inbox from reader questions one last time before the holidays.

But then, certain events over the last few days led to a flood of new messages, necessitating the first-of-its-kind Special Edition Mailbag.

The AAMC just released an open letter about interview hoarding! How can we force applicants give up their extra interview spots so more people can Match?

Look, demanding that applicants act against their own self-interest is not a winning argument.

Even appealing to applicants’ altruism will have limited impact. I mean, canceling an extra interview now so that someone else can have it might give you some holiday season feel goods… but that warm glow will wash away quickly if you end up unmatched in March. A rational applicant is going to interview at however many programs he or she believes is necessary to match, and encouraging them to do otherwise ain’t gonna work.

That’s one reason why I found the AAMC’s announcement so puzzling. But it was hardly the only one.

Another was the timing. Maybe if they’d penned their open letter at the start of the season, programs might have adjusted to avoid overinviting the same group of high performers. But waiting till the end of December to express your concern? Come on. Even the most altruistic applicant can’t give up interviews that she completed in November.

But perhaps most important is the framing. The letter reads as if the AAMC just became aware of the fact that there is not an equitable distribution of interviews… when in reality, this is a problem that’s been building for years, and the idea that might get worse this year was something many people predicted. (Matter of fact, I predicted it the very same day that the Coalition for Physician Accountability recommended a virtual interview season back in May – and for those who are too high-brow to slum around The Sheriff of Sodium site, it was published in more reputable outlets as well.)

At best, the AAMC’s decision to wade into this issue now raises eyebrows about their corporate strategy. You’ve been quiet up till now – why not just keep your head buried in the sand a while longer? At least then you can claim ignorance instead of incompetence.

But at worst, choosing to comment now gives off a faint whiff of victim blaming. There’s a subtle suggestion that students are responsible both for creating the problem and fixing it – instead of acknowledging that they’re rational actors trapped in the system of over-application to which the AAMC has cho$en to turn a blind eye for decade$.

And finally, some of their advice was just… bad.

I am a U.S. MD student applying in internal medicine. My USMLE Step 1 score was low, and I probably didn’t apply to enough programs. Now, because of interview hoarding, I’ve only received five interview offers. I am freaking out. The AAMC says I should apply to preliminary year programs. Should I?

In the first place, even in a regular year, a U.S. senior who ranks 5 internal medicine programs has a 92% chance of successfully Matching.

Graphic from the NRMP’s Charting Outcomes in the Match for U.S. seniors. (Analyses for DOs and IMGs are also available.)

In the second place, even if applicants hoard interviews, they can still only Match at one program. Interview at 50 programs if you want, but you can still only take one position.

That means that programs that over-interview the same group of applicants may get burned on Match Day. However, whatever positions aren’t filled in the Match will get filled in the SOAP – which will create opportunities for applicants who initially fall through the cracks.

My advice? If you and your advisors were confident that you’d Match back at the start of the season, I’d hold the course.

Did you see the Thalamus data drop saying that there is no interview hoarding??? Are their analyses credible? How does this make sense with what everyone else is saying about some applicants being overinterviewed?

I did see it – and Tweeted some initial thoughts. Their conclusion – that there is no significant change in the distribution of interview offers this year compared to last – is provocative, and flies in the face of the AAMC’s Chicken Little letter and the bulk of the discussion in this space (my own included). So what should we make of this?

Many applicants seem quick to dismiss the Thalamus analyses on the grounds that not all programs use Thalamus. This, of course, is true – but it’s also true for ERAS Interview Scheduler or Interview Broker. Nobody has all the data on interview scheduling.

More importantly, just having a limited sample size doesn’t necessarily mean their data are biased. To discredit their data, you’d have to postulate that programs that use Thalamus differ systematically from those that use other platforms – and that the interview hoarding among users of those other platforms is so egregious that it more than offsets the stability that Thalamus is reporting.

To me, the most striking results were the histograms of interviews offered to applicants in anesthesiology and pediatrics.

Analyses from Thalamus, showing the total invitations per applicant last year (red) and this year (green). [n.b., almost all anesthesiology programs use Thalamus, and most pediatric programs do, too.]

And yeah, I’m bothered by the lack of a scale on the x-axis… but the binning would have to be very unusual to change the inference made, which is that the distribution of interview offers looks exactly the same this year as last.

At least, the distribution of interview offers looks the same right now.

My main reservation about the Thalamus analyses is that they necessarily focused on interview invitations – not completed interviews.

But traditionally, as the interview season wears on, overinvited applicants divest some of their invitations. This sets off a cascade of cancellations that trickles down to applicants who initially received few offers, and likely ends up filling in ‘holes’ that otherwise would have resulted in umatched applicants and unfilled positions.

Will we see that cancellation cascade this year? I’m not sure.

Ultimately, I think the Thalamus data are reassuring that programs have adjusted to virtual interviews and we’re not headed for a worst-case scenario. But I’m not convinced that we’re out of the woods just yet – and all things considered, I continue to believe that we’re gonna see a slight drop in the Match rate (say, from around 93-94% for U.S. seniors to around 90-91%).

I’m surprised you believe the Thalamus analyses. Every medical student is personally aware of someone who has received 40 interview offers and someone else who has one. If there is no interview hoarding, then why does it feel like there is?

First, let’s be clear: the Thalamus analyses are not saying that there’s no interview hoarding – only that there doesn’t seem to be a change in interview offers from previous years.

Remember, we’ve had a problem with over-invitation and hoarding for a long time. A paper that analyzed 2016 Match data found that just 7% of applicants in family medicine consumed 50% of all available interview positions. (Many other specialties weren’t much better: 12% of applicants in internal medicine and general surgery filled half of all the interview positions.)

Point is, this is not a new problem. In fact, students have always known that this was occurring. But I don’t think many programs did. (Or, perhaps more to the point, many programs didn’t realize that this phenomenon could hurt their Match outcomes. But once they did, we started hearing about it more, until it reached a fever pitch over the last few weeks.) 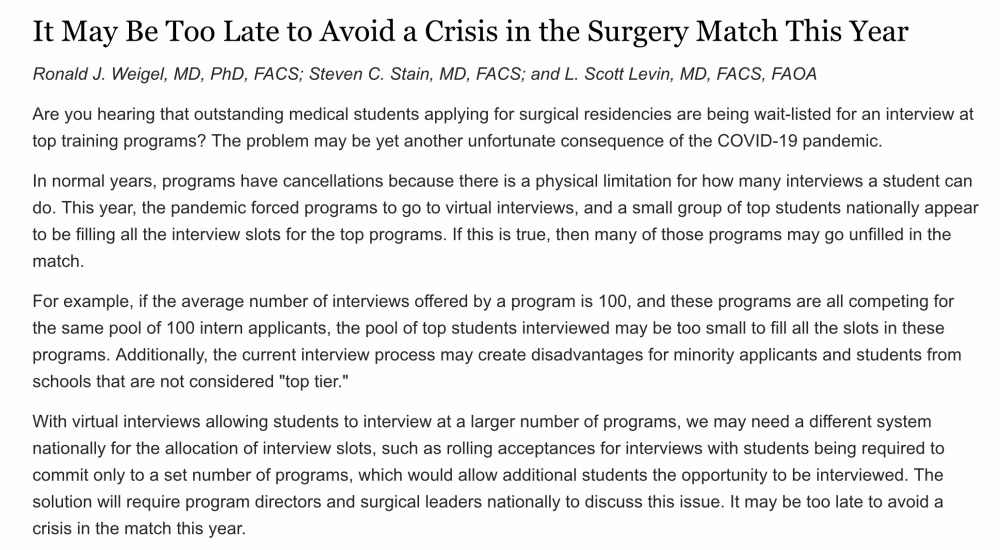 Screenshot from the American College of Surgeons website. The ACS are among many groups to express concern about interview hoarding.

Second, as I pointed out in the previous question, I don’t believe that the Thalamus analyses necessarily mean we’ll have no problems – just that at this point in the season, things look like they do any other year.

But yeah, I do believe their analyses are honestly reported. Thalamus is competing for market share, and they have no incentive to mislead the programs and applicants that are their current (or future) customers.

(Lastly, I respect their willingness to share data. It stands in stark contrast to the AAMC, an organization that sits atop a treasure trove of data, but whose letter was based on “feedback we’ve received.” Come on. This is medicine. Just show us the numbers and let us debate what they mean – and what we should do about it.)

I’m a faculty member and an associate program director; I also advise several fourth year medical students. Is there anything more that can be done this year to improve the system now, or is it a lost cause? Do you have any sage advice?

You’re right, there isn’t a whole lot of time to change things for this year. And I don’t know whether my advice is sage or not, but here it is:

Take one last look at the applicants you haven’t invited.

Try to Moneyball a few talented, highly-motivated applicants that might have gotten stuck in your ERAS filters. Bear in mind, programs that go unfilled typically only miss by 1-2 residents… if you can find even a couple of overlooked gems, you may change the future of your program.

For applicants with lots of interviews:

Don’t cancel interviews you think you may need to Match. But don’t let unnecessary fear guide you, either.

If you’ve received lots of offers, programs are telling you that yeah, you’re pretty good. Don’t be afraid to cancel some of your less-appealing offers. You’ll get some of your life back – and potentially change the course of someone else’s career.

Paradoxically, when programs over-interview the ‘top’ applicants, it actually increases the likelihood that an applicant will match with a smaller-than-usual number of interviews.

Remember, the number of applicants and positions hasn’t changed, and Match outcomes are generally good: last year, 94.1% of U.S. seniors Matched, and 71.1% landed at one of their top three choices.

For applicants with zero or very few interviews:

Get ready for the SOAP. But don’t fear it; embrace it.

Yes, I know – given the choice, everyone would prefer to get a position in the Match. But remember that we have the SOAP for a reason – it’s a designed part of the system. It’s stressful, sure – but it doesn’t have to be stigmatizing. And this year, I think there will be some plum positions to be found.

Be ready to move if you find out that you are unmatched. Develop a strategy with your advisor or deans for how to navigate the process. And think critically about why your application might have been overlooked in the initial round of applications, because you’ll want to take those concerns head-on when you get interest from a program.

Be fully prepared to swoop in and support your unmatched students.

The chaos of the SOAP can consume a lot of bandwidth, and if you’re used to only supporting a handful of students, you should make sure you have the time and resources available at your fingertips to support more.

It won’t help this year – but it’s time to advocate for caps.

You all know that I support application caps, which would both limit over-interviewing and reduce some of the other harmful externalities of overapplication.

But if you don’t have the stomach for that, the idea of interview caps using a ticket system is simple, straightforward, and technically feasible.

Interview caps be implemented as soon as we have the courage to do so. And even if the Match rate this year doesn’t budge, the scare of a near-miss should be enough to achieve buy-in from applicants and programs alike about the need for change.