March 15, 2019 was Match Day. And according to the NRMP’s press release, it was a record setting one.

Among fourth-year students from allopathic medical schools, 94% matched to a PGY-1 program – an impressive figure that has been stable for years. Osteopathic students and graduates recorded their highest match rate ever, with 85% successfully matching. And among international medical graduates (IMGs), 59% matched – the highest figure since 1990-1991.

Well, there’s something funny about some of those numbers – something that deserves a bit of explanation and analysis.

How do we calculate the Match rate?

Obviously, the numerator is simple – it’s the number of applicants who successfully matched. But what’s the denominator?

You might think it’s just the total number of Match applicants.

Not exactly. The NRMP uses the number of active applicants.

In the NRMP Match, not all applicants are active applicants.

As shown in the graphic above, to be an “active” applicant, an applicant must submit a certified rank order list.

Why does this matter? Does excluding applicants who don’t submit a rank order list change anything?

Table 4 from the 2019 NRMP Results and Data report shows the number of active vs. total applicants.

Should withdrawn applicants count toward the Match rate?

To answer this, let’s consider the reasons why an applicant might withdraw from the Match.

A few students probably withdrew for personal reasons – like an illness or family crisis. Others may had academic problems that prevented them from graduating on time and being available to start residency training on July 1 (an NRMP requirement).

Some students may have realized that they were not competitive in their desired specialty, and may have chosen to do a year of research and reapply. Others still may have belatedly decided not to pursue residency training altogether.

The NRMP can also withdraw candidates from the Match if they are unable to verify their eligibility before rank order lists are due. (This can sometimes be a problem for some international medical graduates.)

However, most of the applicants who withdrew probably still found residency positions – just not in the NRMP’s Match.

For instance, students who matched in the military match in December, or the urology match in January are required to withdraw from the NRMP Match. The same is true for DO students who accepted a position in the AOA match. (Importantly, failing to withdraw in these circumstances is considered a Match violation – and to ensure that applicants don’t forget, all U.S. MD and DO medical schools have an official designated to process the withdrawals for their students who match in other programs.)

Should “No Rank List” applicants count toward the Match rate?

In contrast to the multiple reasons why an applicant might withdraw, there seems to be only one likely reason an applicant would submit no rank list: they simply didn’t have any programs to rank. An applicant who applies to Match but gets zero interview offers ends up with no programs to list on their rank order list – and is not considered an active applicant by the NRMP.

In calculating the Match rate, though, there may be an important distinction between applicants who withdraw and those who do not submit a rank list.

See, when an applicant withdraws from the Match, the applicant cannot participate in the Supplemental Offer and Acceptance Program, or SOAP. Therefore, although a withdrawal signifies that the applicant no longer has any intention of accepting a residency spot through the NRMP, submitting “no rank list” does not.

To participate in the SOAP, you have to be registered (not withdrawn) from the Match. (Source: NRMP)

An applicant who n applicant who remains registered – even without submitting a rank list – remains SOAP-eligible, and may still find a residency position. Thus, the failure to withdraw suggests that these applicants are still trying to get a residency spot.

From the NRMP’s standpoint, excluding “no rank list” applicants from the Match rate calculation makes sense. After all, an applicant who submits no rank order list has no chance of matching. And the NRMP is primarily interested in using their data to determine the efficiency of their algorithm.

But other users of these statistics – like applicants, program directors, and policy makers – are probably more concerned with the likelihood that a candidate who wants a residency spot can find one. And from that standpoint, pretending as if the “no rank list” group doesn’t exist seems inappropriate. Unlike the candidates who withdrew, these applicants are still trying to get a residency position; they just didn’t have any programs to rank.

So what would happen to the Match rate if we counted these applicants the same as those who didn’t match?

However, a relatively large number of international medical graduates (IMGs) do not submit rank lists – and if we count them the same as the active IMG applicants who went unmatched, the Match rates drop significantly. 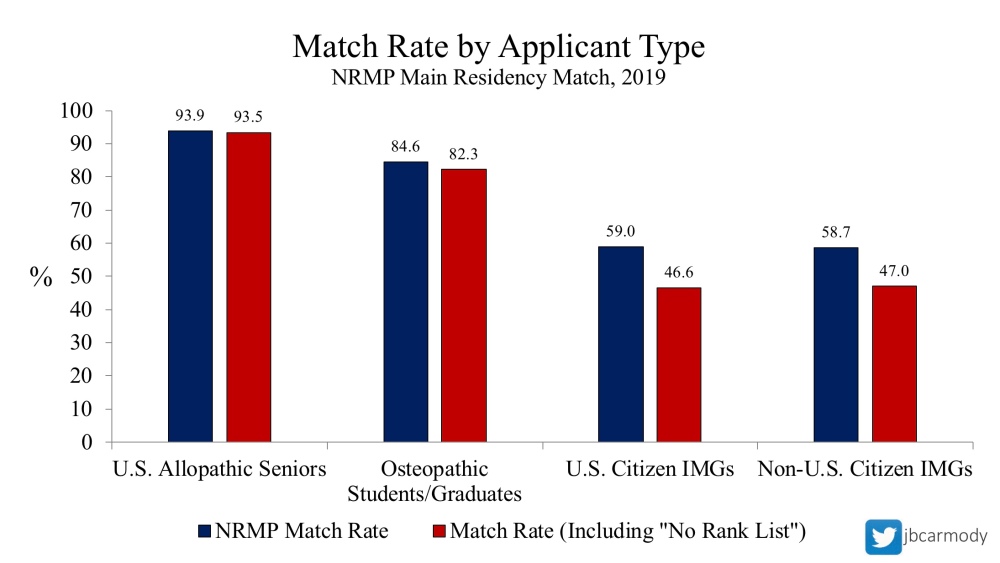 For IMGs, the Match rate depends on how you calculate the denominator.

As shown in the figure above, the NRMP’s Match calculations reflect a sort of best-case scenario, where only a select group of the most qualified candidates get counted. But if we consider an applicant who ends up with no programs to rank as being just as unsuccessful in the match as someone who ranks a few programs but falls through, then the NRMP’s statistics seem overly optimistic.

In their defense, the NRMP is transparent about the way it calculates its figures. The real issue occurs when others quote the Match rate as if it represents the probability that an applicant will enter a residency program. It doesn’t.

Recalculating the Match rate shows what an uphill battle IMGs face in finding a U.S. residency position. Although 47% of IMGs find a residency spot in the Match, the rest do not. And their odds in the SOAP are not especially favorable – only 228 IMG applicants accepted a SOAP position last year. That’s only 2.7% of the 8,411 IMGs who were SOAP-eligible.

In 2019, only 10.4% of all SOAP-eligible applicants accepted residency positions. Odds are especially unfavorable for IMGs.

Take the Match statistics with a grain of salt – and be aware that for some applicants, the chance of obtaining a residency position is significantly less than what a record-setting Match rate might suggest.

(For anyone who needs a more authoritative citation of the analyses presented here, I also presented this logic in Academic Medicine.)

The Match, Part 3: On proposals and the fight for a student-optimal Match