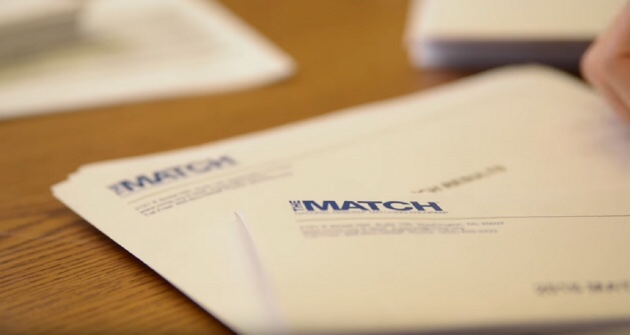 Thanks to COVID-19, it was an application season unlike any other. And now that it’s come to an end, it’s time to tally up the Winners and Losers.

Despite the chaos from COVID-19, 2021 Match rates were similar to previous years.

Early in the season, I had real concern that the combination of increased applications and virtual interviewing would lead to programs ‘overinterviewing’ the same group of applicants, resulting in an increase in both unmatched applicants and unfilled programs.

And while applicants did submit more applications and accept more interview invitations, those trends were offset by programs increasing the number of applicants they interviewed (by ~15% across the board).

Amidst the panic over interview hoarding and interview offer maldistribution, the Association of American Medical Colleges (AAMC) added fuel to the fire by making the curious suggestion that applicants apply to more preliminary programs… in December. Even as late as the week before Match Day, the AAMC continued to play up the uncertainty by ominously promising that this year’s Match would be “strikingly different.”

The AAMC’s opinion was seemingly based on nothing more than a gut feeling – despite the fact that, as the corporate sponsor of the Electronic Residency Application Service (ERAS), they were sitting atop a treasure trove of data that could have been utilized to inform their spitballing.

In contrast, Thalamus – whose software is used to schedule a majority of all interviews in anesthesiology and pediatrics, and many interviews in other specialties as well – provided a steady hand.

In December, they shared their preliminary data on the distribution of interview offers, noting that it didn’t really differ from previous years. The Thalamus end-of-the-season data were similar, and their willingness to share it stood in stark contrast to the AAMC.

Though most media coverage has focused on the Match rates for applicants – which are down slightly – fill rates for programs are up.

Multiple specialties – including internal medicine-pediatrics, which I forgot to include on the graphic above – filled every single position in the Match, while only a handful of specialties (pathology, pediatrics, radiation oncology, internal medicine, and family medicine) had more than 10 categorical programs that went unfilled.

It was another lean year for previously-unmatched MDs and DOs.

Because of the disruptions to the application system – especially for international medical graduates – there had been real optimism that this would be the year for many previously-unmatched doctors.

But according to the NRMP’s statistics, just 48.2% of U.S. MD and and 44.3% of DO applicants who graduated in previous years successfully matched this cycle. (And because the NRMP’s statistics underestimate the real number of doctors who are unable to obtain residency training positions, the actual percentages are probably closer to 43.1% and 37.3%, respectively.)

Before COVID-19, the idea that all residency interviews could be conducted virtually would have seemed preposterous. Now, it’s hard to imagine going back.

Since last year, I’d wondered how COVID-19 might impact students’ career preferences. Would applicants be drawn to front-line specialties like internal medicine or emergency medicine? Or would they flee from them?

We’ll know more once the full NRMP report is available (which includes more granular data including an applicant’s preferred specialty) – but the advance data from the NRMP look like a wash.

Really, only two specialties have dramatically changed in their competitiveness over the past decade: psychiatry and radiation oncology.

Go back to 2011, and the Match rate for U.S. seniors entering psychiatry was 96%; the average Step 1 score for a successful MD applicant was 214; and around 40% of all positions were filled by IMGs. That same year, the 85% match rate for U.S. seniors in radiation oncology was lower than the rate for neurosurgery or otolaryngology, and radiation oncology applicants had the same mean Step 1 score as those entering orthopedics.

By 2020, their fortunes had reversed: the match rate for U.S. seniors was 89% for psychiatry and 99% for radiation oncology.

And this year, although only one psychiatry program was left unfilled in the Match, 33.3% of radiation oncology programs had positions to fill in the SOAP. 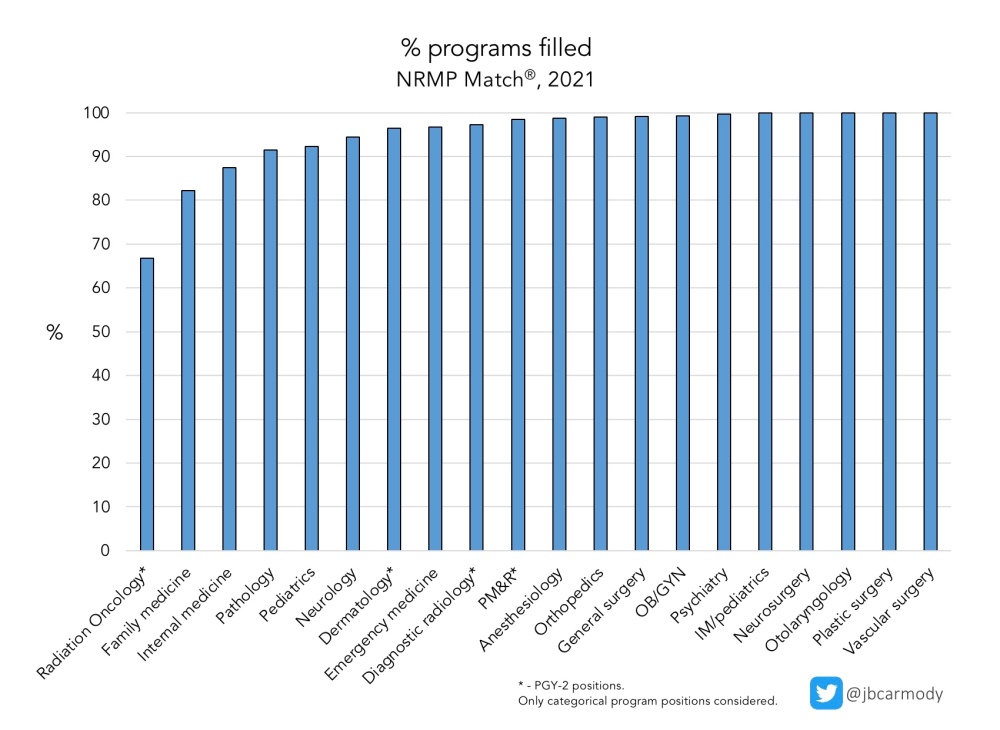 Declining interest among applicants, coupled with an increased number of program positions, has led to radiation oncology evolving from a highly-competitive specialty to the specialty with the largest fraction of unfilled programs.

Okay, show of hands: who was surprised when ERAS crashed only 90 minutes into SOAP?

The AAMC’s CEO apologized for what’s becoming a Match Week tradition: an ERAS crash during SOAP. (How the ‘unprecedented surge… of activity’ catches them off guard every year is beyond me.)

Of course, what the AAMC lacks in software engineering, they make up for in business acumen.

ERAS is the AAMC’s cash cow.

As if Application Fever wasn’t enough to stock the AAMC’s coffers, they recently announced a new plan to monetize the post-SOAP “scramble.”

Now, if you want to apply to one of the few residency positions available when SOAP is over, you can do so for the low, low price of just $10 per application.

Remember that around 10,000 applicants are still looking for residency positions after SOAP – so even with just a few positions available, the amount of money that will change hands under this new policy isn’t negligible. (Never mind the fact that these desperate applicants have already paid handsomely for the privilege to submit hundreds of applications during the regular cycle and SOAP… there’s profit to be made here!)

The reason that every single resident in your program is a white dude isn’t because you’re biased – it’s because there just aren’t enough minority applicants! You don’t even see color, and rank applicants only according to their qualifications. Matter of fact, you interviewed several under-represented minorities and women – they just must have chosen to go elsewhere.

Historically, these kind of lies have been irrefutable.

Sure, you can check the program website to see the residents that a program matched – but how they ranked their applicants is a secret known only to the program director and the NRMP.

But back in the fall, the NRMP began to explore the possibility of collecting and analyzing rank order list demographic information to ensure fairness and equity in the residency selection process.

If a program chooses to rank all their white applicants over all their Asian applicants, or hasn’t ranked a single Black applicant in twenty years, the NRMP won’t tell anyone – because they don’t know.

Rumor has it that the NRMP will announce their intent to collect and analyze applicant demographics very soon. Until then, chalk up another win for racist programs, who get to operate in secrecy for one more year.

The suspension – and subsequent cancellation – of USMLE Step 2 CS forced the Educational Commission for Foreign Medical Graduates (ECFMG) to create new “pathways” to certify international medical graduates for participation in the Match.

However, these pathways didn’t include all possible applicants – so I expected that fewer IMGs would get certified and participate in the Match this year.

The ECFMG already announced their intention to expand their pathways for the 2022 Match – so look for an increased number of IMG applicants next year (and a fat bottom line for the ECFMG).

Before COVID-19, the residency application season had grown to fill half of the calendar year, from the opening of ERAS in September till Match Day in March.

But a September start date puts enormous pressure on everyone. Applicants have to scramble to take the USMLE and obtain letters of recommendation, while program directors have to make sure their new residents are fully up to speed by Labor Day so they can start devoting time to recruiting new ones.

This year, ERAS didn’t open until mid-October… and no one seemed any worse off.

(Here’s hoping this is another change that sticks around in the future, making September available for student and resident education.)

Another residency application cycle, another record for applications submitted.

Folks, there is a limit to how much the system can take.

The reason this year’s application cycle wasn’t a disaster is because programs increased the number of applicants they interviewed by ~15%. That’s great – but it’s not sustainable.

Virtual interviews reduce costs – but they reduce costs more for applicants than programs. The biggest expense for programs is lost faculty productivity – insofar as anyone who spends the day interviewing applicants might otherwise have been gainfully involved in the production of RVUs. But that lost productivity for faculty is a fixed cost, regardless of whether interviews are virtual or in person.

Many programs are already interviewing as many applicants as they can. Many others will get there soon if current trends continue. Don’t say I didn’t warn you.

To me, the biggest lesson from the 2020-2021 interview season is this: the residency selection process isn’t fragile.

Applicants want to match, and programs want to fill. That basic self-interest will ensure that match rates and fill rates remain high, even when the system is stressed.

Self-interest can be a bad thing. Unchecked, it can result in an unfair and inequitable system in which all the players seek only to optimize their own outcomes.

But self-interest can be also good thing. In terms of the functioning of the residency application process, self-interest provides a useful shock absorber. If you make a change – even a sudden or dramatic one – programs and applicants will figure out how to adjust to keep things functioning.

To me, the 2020-2021 application cycle should provide proof that we needn’t be afraid to reform and innovate. The Match won’t break if you change something. (Usually, the people who claim that it will are just putting up a smoke screen to protect their own self-interest.)

As we move on from the COVID-19 application cycle, we have the opportunity to build more efficient and equitable residency selection process – provided we don’t lack the courage to do so.

On Toilet Paper and Application Caps

The Match, Part 5: The Lawsuit